Sometimes what you have planned just can’t happen, the reason being your ingredients have gone bad, you didn’t have the spices you thought you had, or somehow the ingredients you just bought grow legs and walked away (aka your kids or husband ate them), whatever the reason you already started cooking so why not go with it and get creative.  That is where the story begins for this recipe, “Cherry Peach Potato Hash.”

During the summer my meal planning skills are lacking, it is the time of the year when the rules and daily routines are a little laid-back.  With that being said IF I do a meal plan, it goes something like this, “This week we will have fish, chicken, steak, and shellfish… side dishes… hmmm I will just buy everything and figure it out as we go.”  Yep… that’s it, folks.

One day I really wanted sea bass for dinner and I asked Jane what she was in the mood for.  I was expecting her usual pizza, cheeseburger, chicken wings, with grilled cheese and a hot dog answer… nope she screamed one word that won me over… BACON!!!!!

So now I am making sea bass and bacon.  I think I stood and stared at the inside of my fridge for a good 15 minutes until the light went out, thinking, “What the hell am I going to do with sea bass and bacon?” Then I closed the fridge, I couldn’t see anything in there anyway, and it occurred to me I could do an apple bacon hash with a spice maple bass.

How did it become cherries and peaches in my hash and not apples… At this time I went to grab my apples…. where are the apples I bought… I found one… it was mealy, trash.  Okay, I already started cooking… now what?!?

I rummaged through my fridge, frustrated, and slightly panicked.  Cherries in a hash? Peach in Hash? Well, okay, I am going to use both.  Go big or go home… Right?!?!?

Common Questions that get asked about the recipe, and tips to save you time and money.

Be sure to head over to The Messy Cutting Boards Recipe Box where you will find family-friendly meals no matter what the season.

Check out our recipe box

Sign up to receive email updates on new recipes and announcements - plus a few surprises. 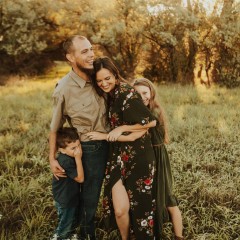 Welcome to my blog!

Here you will find hassle-free meals to help get you through your busy week mixed with family comfort recipes.

Sign up to receive email updates on new recipes and announcements - plus a few surprises.